Warning: count(): Parameter must be an array or an object that implements Countable in /home/dynamo6/dynamo-micropower.com/dev1/wp-content/plugins/css-javascript-toolbox/framework/events/subjects/hook.subject.php on line 82
 The TurboCore platform Series: TurboGenerator | Dynamo
Jason Uncategorized
April 13, 2015 Jason

The Dynamo TurboCore was developed to expedite the deployment of our flagship product, an electric power solution for powering artificial lift systems in the Oilfield—we will be piloting it this summer. Based on this product we will be able to show our partners how to design and develop their own systems around the TurboCore. Simultaneously we will be releasing our 1500 Series Turbocore, which as the name implies, is a scaled up version of the 700 series and is capable of producing over 2x the power. 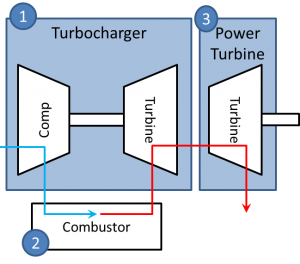 A turbogenerator, as the name implies, is a turbine that produces electric power. The Turbogenerator is created by taking the baseline gas generator and bolting on several components. Hot pressurized air coming out of the TurboCore is converted into mechanical work through a second turbine, called the power turbine. This turbine is attached to a shaft which drives a generator. With the 1500 series TurboCore, the shaft power output for this basic turbo-generator is approximately 15kW.

Gas generators have a few key characteristics that drive their performance. One that is important here is the load line. The load line relates engine speed (RPMs) to engine pressure and airflow—and ultimately total power output. As fuel is added to the engine RPMs increases as does total power. Eventually the gas generator will reach peak power. The factors that limit fuel input and power output for a particular set of hardware include shaft speed limit, temperature limits, and compressor stall limits The limiting factor in any particular situation depends on the full system design and the expected operating environment. 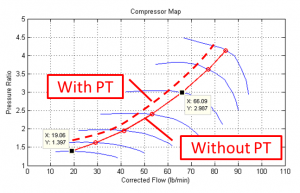 When designing a gas turbine there are a lot of considerations to be made, from optimizing blade shape to optimizing the critical parameters of the gas generator for different applications. At Dynamo we’ve created a suite of tools to help us analyze gas turbine system behavior and find proper match between compressors and turbines to get the desired performance and operating characteristics. An example of how the operating line is impacted by a power turbine is shown in the figure to the left, and represents one of the more complex analyses.

These sets of tools allows Dynamo to quickly evaluate different applications and use cases for the TurboCore, including the implementation of several independent loads and their effect on system performance.  Using these tools, the Dynamo development team has repeatedly demonstrated the ability to rapidly develop solutions around the TurboCore, with design to prototype validation times under nine months.